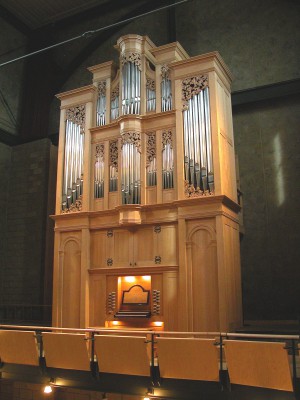 The Rieth Recital Hall organ, designed by Taylor and Boody, is based upon 18th century North German organbuilding principles. It features more than 1600 pipes, and a case of carved solid white oak. The key and stop action are mechanical (tracker), with two manuals and a flat pedalboard. The temperament is set to Bach-Lehman, a hypothetical reconstruction of Johann Sebastian Bach’s preferred system, as specified on the title page of the Well-Tempered Clavier, 1722. This tuning method was re-discovered by GC alumnus Dr. Bradley Lehman (’86) in 2004 and published in the February and May 2005 issues of Early Music. This instrument was the first organ since the 18th century to employ this tuning in its construction.

The organ was dedicated in a series of concerts and events May 1 through May 8, 2005.

Opus 41 in the Press